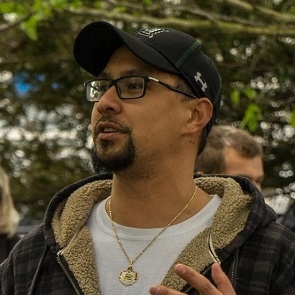 Brandon was born on the island of 'Oahu, to a Filipino mother and a Chinese-Caucasian father. An alumnus of Roosevelt High School, he is proud to have followed in the footsteps of his grandparents. After high school, he took classes at Kapi'olani Community College and later transferred to the University of Hawaii at Manoa. Brandon is fluent in Pidgin and English. Although he took 4 years of it in college, his Spanish is no bueno. He obtained his BA in Sociology, but worked for his father's company providing Internet solutions for the Hospitality Industry.

Due to the overwhelming cost of living in Hawaii, Brandon and his 'ohana (wife, Kapua, and 4 children) moved to Santa Rosa in 2014. He connected with Liko Puha during the Hui's 2015 May Day Festival where he learned about working for SRJC. Seven months later, Brandon became a Network Technician for the SRJC Information Technology Department.

In addition to spending time with his family, Brandon is an avid outrigger canoe paddler. He has competed in OC6 races across the North Bay with the Lokahi Outrigger Canoe Club (Petaluma). Brandon also enjoys woodworking and the Brazilian martial art form known as Capoeira.

As a member of Hui Pulama Mau, Brandon hopes to help students from Hawai'I find their place in Sonoma County. He also loves to share his culture with the students, faculty and staff of the Santa Rosa Junior College.